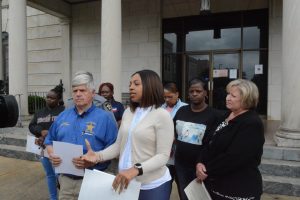 A $5,000 reward has been offered by the State of Alabama leading to the arrest and conviction

of the perpetrator(s) in connection with the double murder of Javon Cortez Banks and Ladarious Devante Lymon. Butler County Sheriff Kenny Harden along with District Attorney Charlotte Tesmer held a press conference on the Butler County Courthouse steps Monday, April 9 to make an announcement of the reward offered by the State of Alabama. Harden stated, “On Oct. 25, 2017 we responded to call where we found Ladarious Lymon and Javon Banks murdered in their vehicle on Airport Road. Since the time of their death, law enforcement officials have followed up on several leads but have been unable to arrest the perpetrator at this time. “Several weeks ago we went to our District Attorney Charlotte Tesmer and asked her to write a letter to the Governor to write a letter requesting a reward for information leading to the arrest and conviction of the suspect or suspects.” Tesmer wrote Gov. Kay Ivey and Gov. Ivey issued a proclamation authorizing the reward on March 25, 2018. Kalendria Warren, a cousin of the family also spoke at the press conference urged anyone who has information about the murders to step forward. She said, “We are here to ask that anyone who has any information to please come forth, so that we can help solve the murders of our relatives. We want peace. We need closure for our family.” Harden added, “We have several law enforcement agencies working on this. We have put a lot of hours working on this and we want closure to this case. If anyone has got information contact the Butler County Sheriff’s Office. The phone number is 334-382-6521 or 334-525-0361. Remember there is $5,000 reward for information leading to the arrest.”