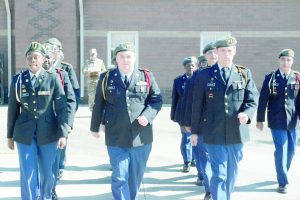 On Wednesday, April 11, a team of inspectors arrived at Greenville High School to inspect and evaluate all aspects of the High School’s JROTC Program.  Tension and uncertainty among the 121 JROTC cadets in the morning gave way to joy and a sense of pride in the late afternoon, as the cadets were informed they had earned Honor Unit With Distinction, the highest level of accreditation a program can receive.

Each of the four companies of the overall Tiger Battalion were then evaluated on their ability to complete a pre-determined marching sequence.  Although all four companies performed well, Delta Company was named Best Drill Company, receiving a perfect 15 out of 15 score.  In fact, the chief drill evaluator, Master Sergeant Shaun Pearsall, told Delta Company that they “nailed it, performing at a higher level than most active duty US Army units.”

Other items inspected later in the day included cadet portfolios, with samples of cadet coursework from over the year, instructor portfolios, and a briefing from the Battalion Staff on implementation of a new Promotion System for Tiger Battalion.  The evaluation wrapped up with a briefing from the cadet company commanders on their Service Learning Project, which was development of a Veteran’s Day Program for Greenville High School and W. O. Parmer Elementary School.

Mr. Gates concluded the day with a parting briefing to the JROTC leadership, led by Cadet Lieutenant Colonel Banes Carlyon.  He revealed that Tiger Battalion had earned an overall score of 198 of a possible 200 points.  Mr. Gates called on the cadets to continue to work hard and improve, especially to strive to raise the level of uniform appearance.

While there is always room to improve, Mr. Gates commended the battalion’s overall performance, remarking that the 99 percent grade is “probably the highest I have given any school this year.”