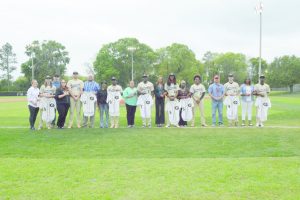 On Monday, April 9 the Greenville High Tigers varsity baseball team recognized its seniors before their game with Excel. Greenville would lose 16-3 the game that evening and then lose again to Excel on Tuesday 9-5.

The GHS Tiger varsity softball team also suffered a loss to Luverne on April 10, 19-9. Senior night for the GHS varsity girls is set for Tuesday, April 17.

The Georgiana School varsity baseball team played four games this past week. In a double header against the Brantley Bulldogs on Tuesday, April 10, the Panthers lost 20-4 and 16-1.

The Panther’s next double header was on the Thursday, April 12 against Pleasant Home. The evening ended with Georgiana losing both games 7-5 and 17-9.

The McKenzie Tigers played Luverne on the Tuesday, April 9 and lost in a shut out defeat 9-0. McKenzie hit the field again on the April 10 against Red Level and grabbed a much needed win 8-7.