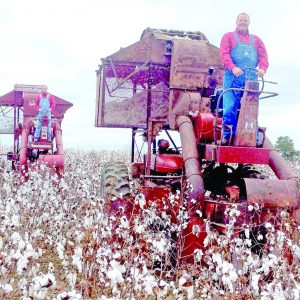 Be sure to mark your calendar for the 29th annual Red Power Round Up coming to the show grounds of Garrett Coliseum in Montgomery on June 13-16. The show is open to the general public.

The Red Power Round Up is the club’s annual national show (only IH products admitted and exhibitors must be national members). The show is hosted somewhere in the U.S. each year by one of the 39 chapters.

The national club has members in all 50 states as well as members in Europe, Africa, Australia and countries around the world. There two chapters in Canada and one in Sweden. As of February 2018, the national club reports that its worldwide number of active members is just shy of 7500.

This year’s Alabama show will feature “Offset” tractors manufactured by International Harvester during the time-frame of 1939 – 1982. Offset tractors, such as the Farmall A, the Farmall Cub, the Farmall B, and many variations on the concept were designed with the engine set to one side of the machine and the operator’s seat set to the other side to allow for maximum visibility when performing farming operations such as cultivating row crops.

A Special Feature of the Alabama show will be Cotton Pickers and Cotton Equipment manufactured by International Harvester during the years it was in business. International invented the mechanical cotton picker and when it went into volume production around 1950, it revolutionized how this particular crop had been harvested in the South for more than a century.

In addition to displays of hundreds of IH tractors of every type, visitors will be treated to live daily cotton harvesting demonstrations of a crop planted right on the Garrett show grounds.

Among other attractions at this year’s show will be vendors of all kinds, product exhibits, IH Trucks and Scouts, parts consignment, a children’s area, women’s activities, tours in the Montgomery area, special seminars, and food vendors.

Don’t miss the 2018 Red Power Round Up. It promises to be one of the largest and most unique ag-related events to ever come to Alabama, so make your plans now to attend and bring the whole family.