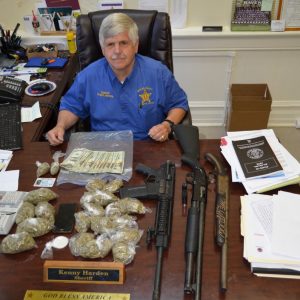 Over $3,000 worth of drugs were confiscated after two search warrants were executed on residences in the Forest Home area, this past Friday morning.

“One was at 215 Baskin Road where we recovered three guns, drugs which included marijuana and crack cocaine and also U.S. currency.

“We arrested Carstelle Deman Stewart, 32 years old. He was charged with Possession of Marijuana First Degree and Possession with Intent to Distribute Cocaine. There is also a probation hold on Stewart.

“The other search warrant we executed was at 825 Monterey Road where we arrested James Henry Davis for Possession of Marijuana Second Degree and Possession of Drug Paraphernalia.

“Both men were placed in the Butler County Correctional Facility. These are cases we have been working on for some time.”

“We are doing a good job of trying to get rid of the drugs in Butler County and off the streets. This is another case that shows the law enforcement agencies in Butler County work well together to support each other.”