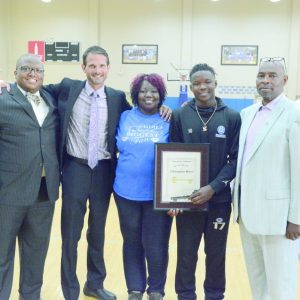 The Georgiana School boys’ track team placed 6th out of 48 teams in the 1-A division at the State Track Meet held in Cullman, Alabama on May 4-5.

Christopher Mixon became the first state champion in Georgiana School history by winning the gold medal in the long jump with a leap of 21’-1.75”.

Martavius Payton took 4th place in the high jump with 6’2” and Sims made 8th with a jump of 5’8”. Jamarcus Sims placed 3rd in the triple jump winning the bronze medal with a total distance of 42’ 8.75”.

LeCedric Haynes placed 2nd in shot put winning the silver medal with a distance of 45’ ½”.

With only five boys participating, Georgiana scored 36 points placing 6th overall among the other 32 scoring teams.

The girls’ 400 meter relay team will return among the top five in the 1-A division without one senior running going into next season.

“How many football teams could even win one game with no football field to practice on and no equipment?  Not many!  These kids excelled at the highest level possible with no track and very little equipment.  I am very proud of them,” said Strycker of the results.

“With all this success, I want to make it clear that for me, this was not about Track & Field.  It was about showing our community that given the resources, our kids will achieve greatness.  In this case, these kids accomplished much without resources,” concluded Strycker.

The school community celebrated the team’s success at Georgiana High School on Wednesday, May 9 with Georgiana Mayor Jerome Antone presenting a key to the city to Mixon.

Antone stated, “This win is all about the community. It means a whole lot to those who live here.” He also gave praise to Strycker for getting the track team restarted.