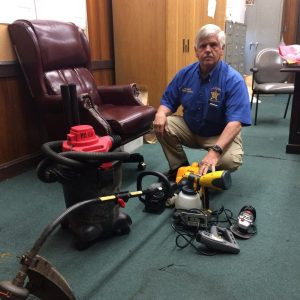 Tips provided to the Butler County Sheriff’s Office after they made a Facebook post asking for information concerning a number of stolen items from a residence on Mobile Highway led to the arrest of Ethan Lamar Wright, age 28.

Harden stated, “On April 25, deputies responded to a house burglary at 12438 Mobile Highway and met with the homeowner who reported several items stolen. They included a weed eater, finishing sander, chainsaw, shop vac, jigsaw, staple gun and a grinder.

“We started working on the case and getting information who had broken into the house. We picked the suspect up and he admitted to the burglary. In addition he admitted to breaking to another house in McKenzie which took place about a year ago.”

Wright has been charged with two counts of burglary.

In addition, during the investigation, Wright’s girlfriend Kelly Sherman attempted to hide the items which had been stolen after Wright’s arrest. She has been charged with receiving stolen property.

“Investigators did a good job of tracking down the stolen property and getting it back to the proper owner,” stated Harden.