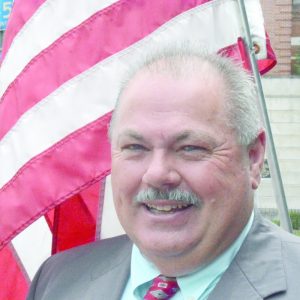 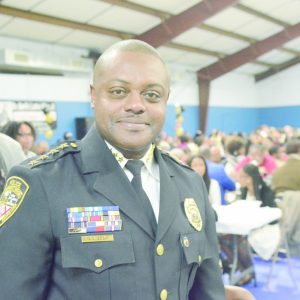 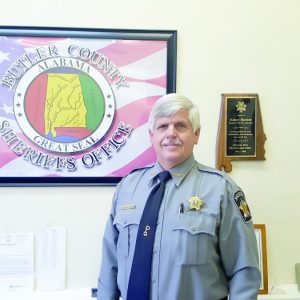 One of the most important primary elections in Butler County for 2018 will be for Sheriff.

There are two candidates in active campaigns who are vying for the democratic nomination in the June 5 primary; incumbent Sheriff Kenny Harden is facing Georgiana Police Chief Carlton Cook.

Greenville Police Department Captain Danny Bond is running unopposed in the republican primary and will face the winner of the June 5 democratic primary in November.

A fourth candidate is seeking to qualify as an independent candidate but as of press time had not secured the required amount of signatures to be included on the November 6 general election ballot and has not been included in our questionnaire.

To follow are the questions and the answers provided by each candidate.

Why do you want to be Sheriff?

Bond: The sheriff of any county is the chief law enforcement official for that county. In addition, the Sheriff must be able to oversee a large staff, the jail, a fleet of vehicles, training, and has many other areas of responsibility. I’ve been in law enforcement for over 30 years here in Butler County and believe that I’m qualified for the job and have a desire to restore integrity, transparency, and community trust back into the office.

Cook: I am stepping out on faith and humbly seeking to become Sheriff to first protect and serve the wonderful citizens of Butler County, while at the same employing my leadership style that underscores the importance of outreaching and engaging with communities to implement new approaches and programs that uplift lives and mentor youth to become self-sustaining and law-abiding adults to help support the needs of the elderly population, and to bring accountability and transparency to the department.

Harden: I’d like to continue to keep the citizens of Butler County safe and give them the type of commitment they deserve from a Sheriff.

What do you see as the Sheriff’s Primary role?

Bond:    The main role of the Sheriff is to manage the staff and operations of the department. He or she must be fair and firm, open to the public scrutiny and a good steward of both the public’s trust and tax dollars.

Cook:    The primary role of the Sheriff is to protect citizens and their property by employing well-trained officers who adhere to policy and procedures, to effectively maintain successful crime prevention and resolution operations, and to timely execute criminal and civil processes. Equally as important however, a Sheriff must be visible in reaching out across communities and working to introduce or assist with programs and innovative solutions that help to uplift lives, prevent problems, and contribute positively to Economic Development. The Sheriff has the responsibility to also educate communities on law enforcement procedures to prevent misconceptions.

Harden: I feel the Sheriffs primary role is to protect the citizens of his or her county and to communicate with law enforcement from around the world to apprehend anyone who may stand in the way of that safety.

What distinguishes you from the other candidates?

Bond:    Having 30 years’ experience in local law enforcement, having seen and learned from several different sheriffs and chiefs of police, and having good common sense has prepared me for this job. In addition, I have a willingness to listen and sensibly react to criticism, treat folks fairly and a desire to be transparent and responsive to all Butler County citizens-all of which makes me uniquely qualified for the post.

Cook:    My leadership style is one that believes wholeheartedly in transparency, support for my officers especially supervisors who will be allowed to do the jobs for which they are trained. I employ an innovative approach to problem solving which is premised on community outreach that listens to concerns, involves stakeholders and supports programs that build positive relationships between law enforcement and the community thereby helping to contribute to economic growth and prevent problems. I’m involved in programs such as Coffee with a Cop, Mentoring High School Seniors, Kids and Cops Day at schools, honoring the families of those officers who made the ultimate sacrifice or hosting a 90-year-old and up birthday party for Georgiana Nursing Home residents. I believe in volunteerism. I, along with several others, volunteered and painted the BCBOE gym so the Bright Beginnings and OCAP students have a clean place to play.

Harden: I am familiar with Butler County, the people of Butler County and what has worked for this county over the last twelve years.

What do you think is the most important skill of being a good sheriff?

Bond: A good sheriff needs to be a good leader, a good communicator, a good steward of tax payer dollars and stretching them to get the most “bang for the buck,” and must be able to work with the District Attorney’s Office toward maintaining peace and order within the Butler County.

Cook: Leadership by example is the most important skill of being a good Sheriff. I believe in being a good listener while engaging in outreach efforts to not only solve crimes but prevent future crimes; being a proven problem solver beyond just making arrests but actively pursuing innovative approaches and programs.

Harden: I feel the most important skill of being a good Sheriff is to be able to communicate with the citizens, knowing that my job is to protect and serve, and keeping an open door policy to anyone who may need assistance.

Looking at the current performance of the Sheriff’s department, if elected, would you keep it going in the same direction, or would you change course? What changes would you implement?

Bond: My administration will have the goal of optimizing all of the assets of the department to be as effective as possible. The priority will be to set a standard and a requirement for honesty, integrity and common sense within the department from the top down. Upon taking office, my first order of business will be to review all aspects of the department to insure fairness, openness, and fiscal responsibility. Our goal would be to let every Butler County Citizen know and be sure that everyone will be treated fairly by the Butler County Sheriff’s Department.

Cook: First, I would open the books so taxpaying citizens can observe how their money is being spent. Next, I will review officer training and provide the necessary professional development.  Supervisors will be given the respect to do their jobs. As a department, we will become involved in community outreach especially as it relates to initiatives that help train our youth, and volunteerism. We will train with the volunteer fire departments to bridge collaborative and respectful working relationships.  Volunteer fire departments can be very helpful in locating missing people as well as in many other areas.

Harden: There would be no changes; I will continue to fight crime as I have been.

In your opinion, what is the largest need of the sheriff’s department and what would you do to fill that need?

Bond: The main need is more personnel. I want to look at cost savings throughout the department in order to afford more people without adding to the county’s budget. I will also look for other ways to pay for additional deputies, such as grants, shared services, etc.

Cook: The greatest need of the Sheriff’s Department is extensive collaborations with adjacent counties, state and federal agencies to stem the flow of drugs into Butler County. Utilize all resources to reduce drug activity but at the same time establish outreach to drug recovery programs and agencies such as making more effective use of the initiatives offered by the Council on Drug Abuse. We want to save families. Lastly, is the need for all of us to live by example.

Harden: In my opinion the largest need would be to transition over to a digital format with our communications and I have been working with the EMA director to establish funding for that need.

In your opinion, what is Butler County’s most pressing law-enforcement issue?

Bond: Our biggest issue is the use of illegal drugs throughout the county. This problem leads to other law enforcement problems such as assaults, robbery, burglary and even murder. We need to work with other agencies and use all available resources to get control of this problem.

Cook: The most pressing law-enforcement issue is prescription and illegal drug activity along with the lack of parental involvement, parental guidance, and Christian training in too many homes. This has a direct impact on crime prevention, crime resolution, incarceration rates, recidivism, and economic development. To truly protect and serve, we must be visibly interacting to uplift lives, listen to concerns, and help prevent problems.

Harden: In my opinion the most pressing issue for Butler County is the lack of a school resource officer within the McKenzie and Georgiana Schools. I have future plans to place a deputy in each of those locations.

Why should voters go to the poll to vote for you?

Bond: Someone once said that to do the same thing over and over and expect different results in insanity. I think we need a change in direction in our local Sheriff’s department and we can’t expect that change without changing leadership within the department. I have the experience, the knowledge, the honesty, the common sense and the commitment to bring positive change to our local Sheriff’s Department and pledge to bring about those changes if elected.

Cook: When I become Sheriff of Butler County, I will be fair, transparent, and open to the concerns of taxpayers, including how money is spent. I am asking the great people of Butler County to vote for me because of my proven track record in protecting and serving; and my sincere desire and on-going efforts to provide solutions beyond making arrests, but engaging stakeholders to implement alternative approaches to prevent problems and encourage our youth to become self-sustaining adults. In addition to protecting and serving, law enforcement must be visible in communities as an integral part of the solutions in a positive way.

Harden: I feel voters should go to the pole and vote for me because I am confident and proud of the job I have done. In 2015 Butler County was named the safest county in Alabama and I would like to see this county remain safe.