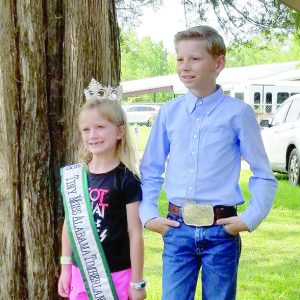 Mason Ramsey, age 11, who became famous after a video of him singing in Walmart store went viral, treated the attendees of the Hank Williams Festival in Georgiana this past weekend for the second year.

He has been called “Little Hank” in his hometown of Harrisburg, Ill. Ramsey has played on the Grand Ole Opry and made an appearance on the Elle DeGeneres Show.

He began singing at age four and found a love for Hank Williams from his grandfather, who would play Hank songs in the garage. He currently lives with his grandparents.

He performed as part of talent brought in by the Hank Williams Fan Club for Friday afternoon and Saturday morning performances.

Ramsey’s demeanor was very gracious. He was obviously tired from his travels but he never refused a photo opportunity with anyone or a request for an interview. When asked of Mason how he felt and if he was tired he replied, “kind of, but not really.” He went on to say he was happy to be at the Hank Williams Festival.

The conversation led to his love of vintage cars and that he was a model car collector. He said, “I’m saving my money to buy a vintage car something between a 40’s model and late 70’s.” It was surprising to learn that Mason was a fan of the Boston Celtics and he was an avid deer hunter.

Mason described his last hunt in graphic detail of how he shot a doe at the end of last season.

When asked how he handled all the attention, he said, “I like it and people seemed to like what I do.” In some respect Ramsey has an uncanny resemblance to a young Hank Williams.