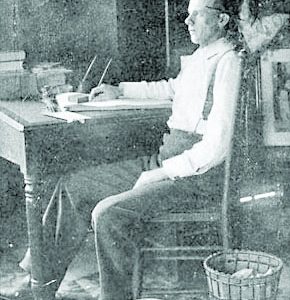 Francis Bartow Lloyd at home in his study from “Sketches of Country Life: Humor, Wisdom and Pesos from the ‘Sage of Rocky Creek”

On a return journey from Greenville to mail his “Rufus Sanders” column to “The Montgomery Advertiser” on the afternoon of August 25, 1897, Francis Bartow Lloyd encountered John A. Gafford just outside of Greenville.

During that encounter, Gafford emptied both barrels of his double-barreled shotgun into Lloyd, killing him instantly.

Lloyd and Gafford had long been acquainted. In a letter that Lloyd’s father wrote to “The Greenville Advocate” and that was published following the killing, Dr. C. C. Lloyd said his son had been shot down by a childhood friend.

Apparently, the two men had stayed in touch over the years and continued to have some dealings with one another. Even Gafford admitted that Lloyd had once bailed him out of the Montgomery County Jail by paying a fine for him.

Yet, that did not stop Gafford from killing Lloyd.

According to Gafford’s own admission in a letter that was printed and reprinted in several area newspapers, the two men’s difficulty was all due to a supposed relationship between Lloyd and Gafford’s sister, Mrs. Miller.

Gafford stated he had heard rumors from a relative of the alleged relationship while he was in Coalburg near Birmingham. He returned to Greenville in order to get to the bottom of everything.

On the Saturday before the killing, Gafford and Lloyd had a meeting at which several other men were present, including Lloyd’s father.

Gafford’s and C. C. Lloyd’s accounts tallied in that they both stated the meeting was amicable. The two men discussed the supposed affair, but Francis Bartow Lloyd vehemently denied the allegations.

Gafford said that as long as the claims were false and as long as Lloyd conducted himself accordingly so that no further rumors were spread, then all was well between them. They parted on good terms, so much so that Lloyd and his father invited Gafford to have supper with them that evening. Gafford declined.

According to Gafford, “On the next Monday my sister went to Spring Hill church in a neighbor’s wagon along with his family, and the deceased went in his buggy and carried a young lady relative of his wife.

“He paid such marked attention there to my sister that general indignation was expressed by decent people who were there, and wound up by transferring the young lady who had accompanied him to the wagon, and taking my sister in her place, and coming as far as his house with her, a distance of three or four miles.”

Gafford was also outraged that the day before the murder took place; Lloyd had allowed Mrs. Miller to use his buggy the entire day. This incident may have been innocent enough, though, for later testimony came out that Lloyd was not at home when Mrs. Miller asked to use the buggy, so Mrs. Lloyd gave her consent for the loan instead.

Regardless of whether or not the loan of the buggy was something Mrs. Lloyd had approved, Gafford was still outraged that Francis Bartow Lloyd had broken their agreement when he paid too much attention to Mrs. Miller at the Spring Hill Church event.

Gafford must have told several people that he would be taking up the issue with Lloyd again because Lloyd was told of the “threats” Gafford had made. In return, Lloyd let it be known that Gafford needed to watch his own step. Lloyd started taking his pistol with him everywhere he went.

On the Wednesday afternoon of Lloyd’s murder, Gafford had been walking the public road near Lloyd’s home all afternoon. He had been seen in the area by at least six different witnesses. He seemed to be lying in wait for Lloyd.

And indeed, he encountered him.

As Lloyd drew his horse and buggy to a halt, he and Gafford exchanged words.

According to Gafford, “The day of his death we met and I asked him why he had broken his agreement. We talked about the matter a few moments, when he suddenly drew a large revolver and I instantly shot him. He jumped up and fell out of the buggy.”

Lloyd was most likely dead before he hit the ground, for one shot hit his chest and the other his heart.

Gafford left the scene of the crime, but as he did so, he encountered two men out riding their bicycles. Those two men, Frank Daniel and Earle Lewis, would later testify in court that Gafford admitted his actions. Also, Gafford repeated his claim of killing Lloyd to several other individuals he passed in the vicinity.

That Gafford killed Lloyd was never really an issue. He admitted as much himself by telling the two men, “Boys, I’ve emptied both barrels of my double barrel shotgun into Bartow Lloyd. He’s up the road; you’d better go and see what you can do for him; good-bye.”

The case that followed would never be one about guilt, but whether or not Gafford killed in self-defense, or if he had premeditated the murder.

He evaded Butler County’s Sheriff Shanks and his posse, made up of citizens from Greenville, PineApple, and Fort Deposit, by hiding in the swamps of Pigeon Creek near the old mill in McKenzie.

The day after the murder, Gafford surrendered to his brother, Neil, and turned himself in at the Butler County Jail.

When news came that Gafford had surrendered, Shanks received word that a lynch mob was forming in the McKenzie area. The group planned to come and exact revenge on Gafford for killing one of Greenville’s favorite sons.

Shanks telegraphed Gov. Joseph Forney Johnston to get permission to have the Greenville Rifle Company come out to protect the jail. With permission granted, Shanks may have saved Gafford’s life.

Yet, Gafford claimed not to be afraid of any lynch mob, though perhaps he should have been because the outlaws John Hipp and Charles Kelley had been lynched from the Butler County Courthouse just a few years before.

In the end, Shanks got permission to move Gafford to Montgomery to await trial there. No lynch mobs ever showed up in either location.

Gafford’s trials will be the subject of next week’s installment of “Francis Bartow Lloyd: Writer, politician, victim.”