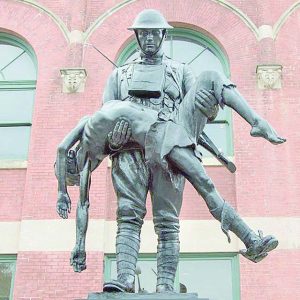 Nineteen men killed in action during World War I will be honored Thursday, July 26 as the Fort Dale Chapter of the Daughters of the American Revolution (DAR) dedicates the Butler County World War I Memorial to their honor at the Greenville Area Chamber of Commerce (GACOC).

Historian, philanthropist and author Nimrod T. Frazer will be speaking at the dedication. Frazer has dedicated years of his life researching World War I and the role of the Rainbow Division, focusing on the works of the Alabama 167th National Guard. Frazer’s father, Williams, served with the 42nd Rainbow Division in France.

Frazer will also be honored by DAR receiving the DAR Medal of Honor on National Defense Night at the DAR Continental Congress in Washington D.C. June 23. The DAR Medal of Honor is the highest award given by the National Society of the DAR, and the honor is being bestowed upon Frazer for his efforts in establishing the Rainbow Division Memorials.

Frazer co-founded the Croix Rouge Farm Memorial Foundation and commissioned sculptor James Butler to create a bronze statue honoring the men of the Rainbow Division. The statue is located on the site of the Battle of Croix Rouge Farm. Frazer went on to commission two more statues from Butler. Butler’s “The Rainbow Soldier” can be viewed at the Union Station in Montgomery and “The Daedalus,” can be viewed on Maxwell Airforce Base. Frazer is also an honorary Chairman on the Alabama World War I Centennial Committee.

The dedication of the Butler County World War I Memorial will be held at 11 a.m. Thursday, July 26 at the GACOC, located at One Deport Square in downtown Greenville