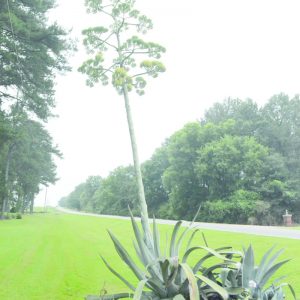 At Billy and Annie Killough’s house on Alabama Highway 10 east of Greenville a rare flowering event is taking place. They have a century plant which has grown a 20-foot stalk which started off looking like a huge asparagus shoot.

The century plant, or more commonly known Agave americana, typically blooms between 8-30 years or sometimes longer and typically will die after it flowers.

There are over 200 species of agave that vary greatly in size and color. Some bloom every year. The misleading name of century plant has probably one of the most impressive blooms of the species.

The plant is low maintenance and drought tolerant. Once it reaches maturity, a central stem will grow up to 20-feet tall during the summertime and pale yellow or white blossoms will appear atop a branched spire that almost look like broccoli flowerets.

The century plant is quite striking with large hard textured leaves that are greenish-blue and boldly textured.

The leaves are very large and can reach up to six feet long and be 10 inches wide. The plant can spread up to 12-feet.

It is recommended for anyone growing an Agave americana to plant it well away from anyone who might brush up against the leaves. They have sharp spines which can injure pets and people.

Annie indicated she believed she planted her Avave about 25 years ago. Several other century plants have been spotted around the Greenville area.

The plant is native to Mexico but well known in Texas, Arizona, Hawaii, Louisiana and California. It has sweet nectar and is typically grown in well drained soils.

Most people recognize the Avave plants being used for making mezcal.