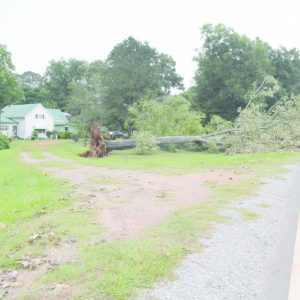 “A rare Southeast U.S. derecho swept through the entire state of Alabama from north-to-south during the afternoon and evening hours of June 28th, 2018.

“A derecho is defined as a widespread, long-lived wind storm comprised of a complex of rapidly-moving thunderstorms, which produce a swath of wind damage 250+ miles in length, with severe-caliber wind gusts (at least 58 MPH) along most of its length.

“While derechos can happen in this part of the country, they are infrequent. These types of storm systems feed on the highly-unstable air mass commonly in place during the summer and self-sustain as their cold pools mature, growing very large in size after originating from a much smaller cluster of storms.

“This particular event featured a complex of thunderstorms that resulted in wind damage along a track nearly 400 miles long, originating in Central Tennessee and ending along the Gulf Coast,” according to the National Weather Service.

Alabama Power indicated that as the derecho swept south 231,000 of their customers across Alabama had lost power sometime as damaging winds toppled trees across power lines and broke power poles.

About 2,600 of their customers lost power in Butler County and another 2,000 in Ft. Deposit and Ramer. By midnight, most of their customers had power restored but there were crews working through Saturday to restore power to some areas.

Pioneer Electric had 4,000 customers without power in Butler County and their surrounding service area.

Butler County EMA Director, Kris Ware, said she knew of four houses with trees down on them and a couple had roof damage.

One man in Clay County was killed when a tree fell on the car he was driving. Also, two people were hurt in Jefferson County and one person was struck by lightning in southeast Huntsville.