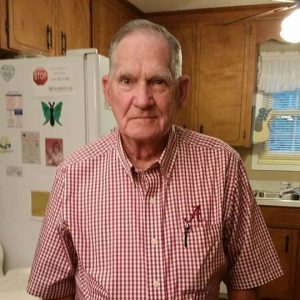 Altruism, the belief and practice of selflessness and concern for others, is a character component often lacking in today’s society, but, Reese Raybon, a pillar of the Greenville community, displays this by frequently volunteering every Tuesday, Wednesday and occasional Friday at L.V. Stabler Memorial Hospital.

Linda Hamilton, Community Outreach Director, said Raybon assisted every opportunity he could. From helping patients to the physicians at the hospital, Hamilton said Raybon consistently sought to improve every one’s day.

“Some of the small things Reese does around the hospital to brighten someone’s day is getting visitors coffee, paying for and delivering someone’s lunch, and just stopping by and visiting with a patient,” she said.

“He also helps the employees as much as he helps the patients. Departments are always asking for Reese. He helps everyone. … If they have a need for something he is happy to help.”

Raybon said he also could not remember how long he had been with the hospital but supposed it had been 10 years and accredited his wife with facilitating his volunteer efforts.

“I suppose about 10 years,” Raybon said. “I just like to help people. They are important. My wife, I lost her, we were married almost 60 years. Sometime, before she passed away she wanted me to lease it out and at that time she was at the hospital.

Having owned a store in the community for nearly 40 years, Raybon understands the importance of customer service and what it means to be invested in your community.

“Customers were important, and it’s just important to me to continue to assist them and tend to the needs of the people,” Raybon said. “One of the things, the hospital is very important to Greenville. The small things someone can help a person with are so important with the time they’ve got, whether their mother is sick, their son is sick, or if they’re terminal, it’s just important.”

Hamilton said Raybon’s experience in the community does help him to make a deeper connection with those at the hospital, and his volunteer efforts are second-to-none throughout the community.

“Reese has always been a people person and has always helped a person in need,” Hamilton said. “Reese helps so many that we never know about,” Hamilton said. “He works with the food distribution with Joseph’s Ministry and with church. He takes many to doctor’s visits and takes meals to shut-ins.  Reese is an awesome person and I could never say enough.”

David Norrell, Director of Business Development, said Raybon did a wonderful job helping around the hospital, and had been doing so for a number of years. Neither he nor Hamilton could recall how long Raybon had been with the hospital, but his impact was substantial.

“He is one of several volunteers that we have, but he does a great job because he knows so many people in the community,” said Norrell. “He is so personable, and he goes the extra mile to check on the patients. He’ll ask if they need anything to drink or do for them on top of whatever his duties are.”

Norrell said it is obvious Raybon’s care in tending to others, often going the extra mile to help.