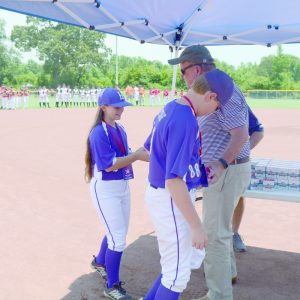 This past weekend, the City of Greenville Parks and Recreation Department (GPRD) hosted the 2018 Dixie Youth Ozone State Baseball Tournament.

On opening day, Greenville Mayor Dexter McLendon welcomed everyone to the tournament and city saying some of his favorite memories were coaching Dixie Youth Baseball. He and Councilman Ed Sims, who is over the GPRD, handed out commemorative baseballs to all the players.

As typical, the host team receives a “bye” into the tournament but Greenville failed to advance into the final rounds. Though starting off with a solid win against Decatur American on Thursday, 14-4, Greenville then ran into the buzz saws of the Dothan teams. They lost on Friday, 19-0, against the Dothan Americans and then fell to the Dothan Nationals Saturday morning 18-1.

From an economic impact, Greenville’s hotels, restaurants and stores did well. Twelve of the visiting teams stayed in local hotels.

Comments from the parents from the visiting teams were positive about their experience in Greenville and the hospitality they felt was shared by the community.

Sims said he was proud of the effort of the GPRD to host the tournament and all the hard work that was put into maintaining the fields and accommodating the visiting teams.

Of the 16 teams, which players were of the ages 12-13, there was one female player, Miriam Skinner. She was selected to Hueytown’s All-Star team.

Though Hueytown was put out of the tournament on Saturday, they played hard and Skinner made several contributions to her team’s effort.

She said she had been playing baseball since the age of three and enjoyed the competiveness of baseball over softball.

She plans to convert to tennis in the upcoming years.