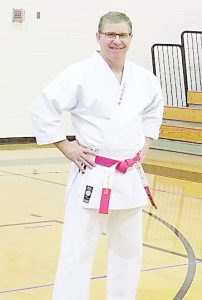 Mark Rudd of Andalusia an Isshinryu Karate instructor has reached the pinnacle of his Martial art. He was the seventh Dan Sensei is to be inducted into the Isshinryu Karate Hall of Fame in Gatlinburg, Tenn. this Friday, July 20.

The fifty seven year old Instructor has been studying Isshinryu Karate for thirty two years and teaching since 1991. Rudd started his first Karate school in Louisiana then moved to Alabama in 1994. He started the Andalusia Isshinryu karate school in March of 1995.

Among Rudd’s accomplishments is his Dojo in Andalusia which was inducted into the Isshinryu karate Hall of Fame in 2016. Rudd  started and has sponsored one of the most respected  Martial Arts Tournaments in the southeastern U.S., the South Alabama Open Karate Tournament which is on its twenty first year.

Rudd said, “The call took me by surprise, because I thought they were calling about one of my students. I am truly humbled and honored.” Rudd will be the youngest among the four that are to be inducted.

He is widely known and well respected among his peers and around the spectrum of the Martial Arts world.