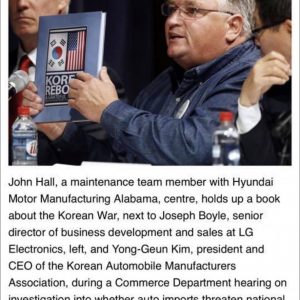 At the U.S. Department of Commerce’s most recent hearing regarding whether the imports of cars, trucks and auto parts pose a threat to American national Security, Greenville native and Hyundai Motor Manufacturing Alabama maintenance technician John Hall had the opportunity to speak against the imposed taxes. March 8, President Donald Trump issued Proclamations 9704 and 9705 on Adjusting imports of Steel and Aluminum into the United States, under Section 232 of the Trade Expansion Act of 1962, which seeks to impose a 25 percent tax against imported steel and aluminum products. The tariffs to be placed on imported steel and aluminum were effective March 23, 2018, and in the hearing held Thursday, July 19 regarding the proposed tariffs, Hall spoke to the concerns he as well as fellow Alabamians have regarding the tariffs. In a report of the hearing from AP News, Hall spoke to the risk many of his friends and neighbors may face if tariffs continue. “New tariffs on automotive imports would have a devastating effect,” Hall said. “I am one of thousands of American workers whose livelihoods would be put at risk by a substantial tariff on automotive goods. It would not be possible to change our supply chain overnight, and a 25 percent tariff on parts would raise production costs at our Alabama factory by about 10 percent annually. This would force us to raise prices and cut production. A lot of Alabamians, my friends and neighbors, could lose their jobs.” Hall has worked for the Hope Hull manufacturing location for 14 years and said he was grateful for the opportunity to share his love for the company and his concerns regarding the tariffs and how they may affect jobs and American consumers. “Most people who went were CEO’s or high officials in their companies, and Hyundai sent me as a regular maintenance team member,” Hall said. “The very fact Hyundai would send a common worker when they could have sent a lobbyist, lawyer or CEO or someone high up in management is great. They sent a regular worker up there. I’m a company man. I’m concerned about these tariffs. It would raise the price of a car. A tariff is a tax and its passed on to the consumer.” Hall said his local management assisted in his
preparations to speak at the hearing and was grateful for the chance to share his love of Hyundai with others. “I came up with my own speech, and I had to get it down to five minutes,” Hall said. “They took a chance on me, and I’m thankful they gave me an opportunity to share my love for the company.” Hall said beyond the opportunity to share his love for Hyundai, Hall said he was concerned about the imposed tariffs and hoped others would use his experience as a reason to stay aware of different legislature and its affects. “Really, I’m concerned about these tariffs,” Hall said. “It would raise the price of a car. A
tariff is a tax and its passed on to the consumer. As consumers, I think you always need to be aware of what legislation is going on that could affect your job, and if its affects your job in a negative way you need to be active in talking to your legislatures.”