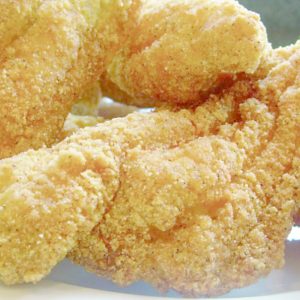 Four finalists, three judges, two days and one winner and that set the table for judging Bama’s Best Catfish July 26-27. The Green Leaf Grill in Mentone took top honors in the competition sponsored by the Alabama Catfish Producers, a division of the Alabama Farmers Federation.

The contest, which celebrates National Catfish Month in August, carried judges from Mentone in the state’s northeast corner in DeKalb County south to St. Clair County’s The Ark in Riverside. The next day, judges crossed over to Heard’s BBQ & Soul Food in Maplesville in Chilton County to the last stop at David’s Catfish House in Thomasville in Clarke County.

“It was an honor to be a finalist, but winning is just a dream come true,” said Green Leaf Grill owner Jimmy Rogers. “I was born and raised eating catfish. It’s always been on my menu, and it’s our best-seller.”

Bama’s Best Catfish finalists were selected from over 200 customer nominations submitted on the Federation’s Facebook page and at AlabamaCatfish.org. David’s Catfish House received the People’s Choice Award through online voting.

“I especially like seeing the different ways they prepared catfish — from catfish cakes to seasoned grilled catfish,” Kyser said. “We all eat with our eyes first, and when I saw the fried and grilled catfish at the Green Leaf Grill, I couldn’t wait to bite into it. It was as good as it looked.”

Rogers’ preparation and presentation pushed the Green Leaf Grill to the top for judges, Kyser said.

McCall said the restaurants were unique, and choosing a winner was difficult.

Edwards said he’d been practicing for judging the contest his entire life.

“I was born for this,” the TV personality said. “I love catfish. I grew up eating it, practically every single Friday. My grandmother would hold a fish fry, and often I would overindulge.”

In addition to eating delicious catfish, he said judging the event was educational.

“I learned a lot about catfish and its production,” he said. “Alabama ranks second nationally in catfish production, behind Mississippi only. Those two states, combined with Arkansas and Texas, account for 96 percent of catfish production in the U.S. It’s big business, and competitions like this only help. Several of the restaurants said their business had increased since they were named a contest finalist. I also met some nice catfish farmers who are proud of what they raise on their farms.”