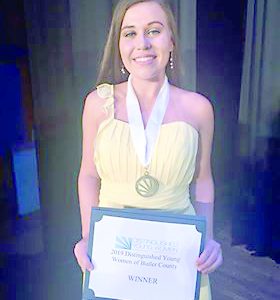 Grayson Edwards, a Georgiana High School senior, poses following the 2018 Butler County Distinguished Young Women program with her certificate. Edwards will take a total of $2,050 with her when she graduates this school year. (Photo submitted)

Edwards said seniors who had participated in the program the previous year had shown her the program’s shift of perspective from regular pageants and had drawn her to participate.

“The biggest reason why I decided to be a part of it was the seniors from last year. At first, I was like I wasn’t a pageant girl, but when I got there I realize it wasn’t a pageant. I ended up making new relationships and having new experiences and was something I would like

DYW evaluates participants in five categories with more than half of scoring focusing on areas not pertaining to beauty.

Each DYW program evaluates participants in scholastics at 25 percent, interview at 25 percent, talent at 20 percent, fitness at 15 percent and self-expression at 15 percent. Edwards said talent was the largest diversion from a regular pageant for the program.

“The first thing I noticed was talent was different than you see that in some pageants,” Edwards said. “Because this was a talent that was personal to me. Being able to do the self-expression in the essay was also different. It was all really just to not be a person in a pretty dress.”

Edwards said when faced with the choice of what to do for the talent portion, it was not hard for her to choose to use the platform to express her faith singing the song, “King of my Heart.”

“One of the biggest platforms I stand on is my faith and being able to reflect my relationship with God and giving back to him with my talent,” Edwards said. “This was the reason I decided to sing ‘King of my Heart,’ because it was about pleasing God.”

Edwards did not win the talent portion, but she said she was proud of how she had performed.

“I feel like God was moving in that room, even in the crowd,” Edwards said. “When the song was finished, I felt myself shaking because I knew it was the song I was supposed to sing. It was better than any rehearsal I had before.”

Having won at the local level, Edwards will go on to compete in the State Program January 18-19, 2019 in Montgomery. Edwards said she is looking forward to making new friendships and encourages anyone who is on the fence about participating in next year’s program to take the chance.

“It’s always important to try new things, because you never know what could be the outcome from that,” Edwards said. “It’s also about showing who you are and stepping outside of your comfort zone. The program encourages you to be unique as you can. You can be who you are without following into the crowd. It’s about getting on stage in a bold way and letting you express yourself fully and show it to other people. You get a chance to show the best of you.”

Edwards will graduate from Georgiana High School in May and will take a total of $2,050 in cash scholarships from this year’s program with her. She plans to attend Lurleen B. Wallace Community College or Troy University before transferring to Mississippi State University to study veterinary medicine.