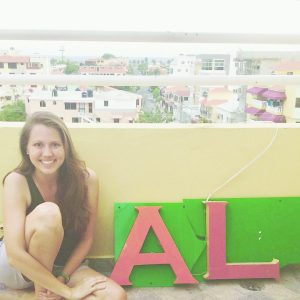 Emily Lincoln, former Fort Dale Academy Student, spent 11 months traveling to 11 different countries to spread the word of Christ. Above Lincoln poses with Alabama’s AL abbreviation the week before her return back to her home state from the Dominican Republic at a rooftop party the missions team had thrown for their hosts.

While many people her age were seeking to establish their careers following graduating college, Emily Lincoln, former Fort Dale Academy student, spent the last 11 months traveling to 11 different countries to spread the word of God.

‘Adventures in Missions’ is a Christian missions organization, which seeks to assist those heeding the call to go out into the nations and serve. Lincoln said she had been searching for a way to serve in a missions capacity following college in a full-time capacity when she stumbled upon the group’s Facebook ad.

“I was actually looking for a way that I could do that after college, more so a job and such, but the Lord had put missions on my heart,” Lincoln said. “I still wanted it to be a job because that’s what you’re supposed to do after college, but then. it came up on Facebook after searching on Google for different things. It was an ad and watched the video and saw that’s what the Lord wanted me to do. My intention wasn’t to go on a mission trip at first. It was a God thing on how it all sort of happened. It was cool to see, too. Just looking at where I am now, I couldn’t imagine not having done it.”

“Your squad was made up of 40 people, and there were six teams total,” Lincoln said. “Each team would go to the same country, but we would do different things. It could span from getting an elementary school started. We started a thrift store that would serve a hospice for elderly people who couldn’t tend to themselves. I got to do financing things for a sex trafficking. Whatever the ministry hosts needed, we would take care of. The overall purpose was to share the love of Christ, and to take that back home, too. It’s not easy to just go out into other countries to do what we did. It taught our squad a lot, so they could go back into their communities and tell of what we did there. It was just about loving people.”

Lincoln said her missions work had impacted her most in being able to see the beauty in others.

“It was all about diversity,” Lincoln said. “Here, I had one mindset on people in general and stereotypes, but being able to go out and experience different cultures and meet so many people of different backgrounds and see the diversity changed that. I was able to see God’s creativity in that, no one is the same. It’s taught me to see the beauty in people.”

Lincoln will again take up her hiking bag and return to mission work this upcoming September as she travels to Greece for three months to serve the same refugee camp from her time on the world race.

“Well, I will be going back to Greece for three months in September to work with the ministry there,” Lincoln said. “There were over 40 different nationalities in the refugee camp when I was there before. We didn’t think we would see people from Syria, Iraq or Iran. It was different to stand beside them and work together with the different countries, so I’m excited to return in September.”

Missions work often does not come without cost, and Lincoln shares her testimony of her journeys through her personal blog and has a t-shirt ministry, which often support her missions work at https://www.bonfire.com/going-back-to-greece1/.