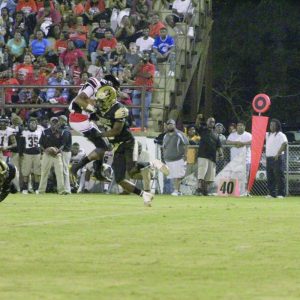 Greenville High School (GHS) head coach Josh McLendon said while the team managed to secure the win, he saw many areas of opportunities for the Tigers from the sidelines Friday night.

“Well, I thought it was typical of the first game,” McClendon said, “a lot of mistakes, real sloppy at times and real good at times. We’ve got a lot to clean up. That’s a heck of a football team. We knew that coming into the game they were going to be very, very good. So, we had our work cut out for us. We made it a little tougher on ourselves with turning the ball over, and really giving up an interception return for a touchdown and then a freak-kind of fumble on a punt return for a touchdown, so we didn’t really help ourselves out much, but I’m proud of how we played, and I’m proud of the fact we kept playing.”

Not looking to go down without a fight, Greenville answered back with 1:26 left in the quarter, ending the half 17-16.

After the half, the Tigers held the Jaguars until the last minute of the third quarter, when Hillcrest scored on a fourth-down punt from Greenville, pushing the Jaguars’ lead to 25-16. But, with 17.5 seconds left in third-quarter play, Boggan again scored for the Tigers, making the score to 25-22. The Tigers’ extra point attempt was no good.

Necessary momentum from the Tiger’s key players in the fourth quarter helped to hold the Jaguars to 25 points. The Tigers manage to put the winning touchdown on the board with a pass from quarterback Javion Posey to Ja’bez Sims.

Playing it safe, Greenville opted to keep to the kick rather than a 2-point conversion taking the lead 29-25 with 6:29 remaining in the game. Sims said it was comforting to know he had been able to end his last first high school football home game leaving everything on the field.

Posey, who is also going into his senior year, said the team had known it was a big game for the Tigers coming into Friday’s home opener and said the support from both the sidelines and crowd had helped to drive the Tigers to its first win of the season.

“We’re going to try to keep this winning thing going,” Posey said. “We’re going to keep playing four quarters. The support is great. That’s what kept me motivated really. It drove me to get the job done.”

The Tigers will host the Carver Wolverines Friday, and McLendon said the team would be looking to remain healthy coming into the showing and had used Friday’s win as a lesson learned for the team moving forward.

“They’re a 6A program,” McLendon said. “They’re going to be very deep on both sides of the ball, so physically getting back into playing shape, we’ve got to make sure we are taking care of our bodies this week to get going. We’ll be fine. We’ll be ready. This helps. It makes the bumps and bruises not so bad after a game like this.”