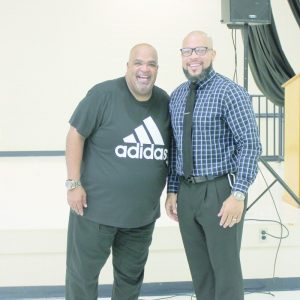 Reggie Dabbs came to Greenville Middle School and delivered a Character Education Assembly to the students in grades 5-8.

The event was sponsored by Refuge Student Ministry from Greenville First Assembly of God. 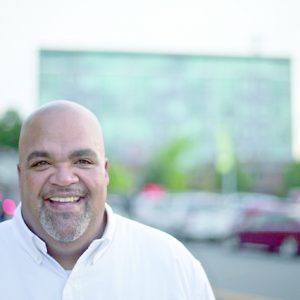 faced with drugs, alcohol and suicide. He also entertained them by playing the saxophone.

He is one of the premiere and highly sought-after school assembly speakers in the United States.

According to his website www.reggiedabbsonline.com he was born to an unwed teenager. Reggie Dabbs considers himself fortunate to be alive. With no place to go, his mother, a pregnant teenager ended up living in a chicken coop in Tennessee. It was there she remembered a former school teacher, Mrs. Dabbs, who had said to her students, “If you ever need anything, call me,” and gave the students her home phone number. The girl called.

Mrs. Dabbs and her husband, whose six children were adults by this time, took the girl into their home and cared for her until after the baby was born. They continued to care for little Reggie as foster parents until he was in the fourth grade, and then they officially adopted him and gave him the Dabbs name.

As the Dabbs’ reared Reggie, they instilled in him strong moral values, for which he is genuinely grateful. They also ingrained in him the fact that in every situation he faced, he had a choice. What he did with those choices was entirely up to him.

In the sixth grade, Reggie began playing the saxophone and hated it. At the insistence of his parents he continued to practice and to play. Not until his freshman year in college did he actually enjoy the instrument, and today, he plays with fervor and expertise.

After graduating from college, Reggie began his public speaking. During one speaking engagement, his host asked if he would be interested in addressing a high school assembly. From that small beginning in 1987, Reggie has become a popular public school speaker.

When addressing a school assembly, Reggie talks to the kids in a humorous style about choices each of them has when faced with drugs, alcohol, suicide, etc. Reggie gets in kids’ faces and tells them that he never smoked a cigarette, never did drugs and never drank alcohol, because he chose not to. He assures them that they can make the same kinds of choices.

Reggie talks to kids about family and how thankful they should be that they have families. He talks to them about dating relationships and emphasizes that virginity is the most honorable choice. Most of all, Reggie drives home the fact that “You can never change your past, but you can change your future!”

From being a “Problem” to an unwed teenager, Reggie is fast becoming one of the most in-demand speakers who helps teenagers meet their problems head-on and overcome them.

Reggie makes his home in Ft. Myers, Florida with his wife Michele and their son Dominic.