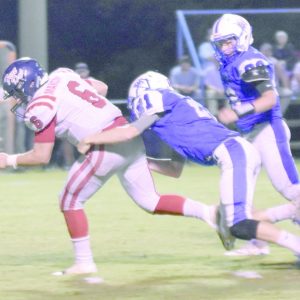 Pictured is Eagle running back Clay Mansman who rushed for over 100 yards including a TD carry. (Photo submitted)

With their starting quarterback taken out of the game within the first few plays, the Fort Dale Academy Eagles stood little chance against the Wilcox Academy Wildcats. The Eagles lost 43-14 in the matchup.

FDA football head coach James ‘Speed’ Sampley said the loss of senior Baron Brack early in the game did not bode well for the Eagles and was likely a large factor in the team’s loss to the Wildcats.

“We got the opening kickoff, and went 70 yards for a touchdown immediately, and then Baron Brack, our quarterback, got a concussion,” Sampley said. “We kind of went downhill from there, because we never even slowed them down. We’ve got to tackle better.”

While the Eagles’ showing against Lee-Scott had many stand-out players in the previous week, Sampley said the team had been fortunate enough to survive in the outing against the Wildcats.

“Samuel Sherling came in, he’s a sophomore, and it was his first varsity experience,” Sampley said. “I don’t think he did all that bad, but he didn’t have very much experience. We’ve got to rally around him when stuff like that happens, and quite honestly, we didn’t.

“We just kind of fell apart. I thought we had some younger guys near the end that came in and played hard, but we’ve got to sustain a lot better effort than we are right now.”

Fort Dale fell 1-1 in season standings and will look to improve this Friday as the team faces Macon-East Montgomery Academy. Sampley said the team will look to continue to improve fundamentals and boosting its confidence this week heading into the matchup.

“We’ve got to have some confidence,” Sampley said. “They’ve got to come out of practice feeling good about the game plan and play hard while they’re there.”