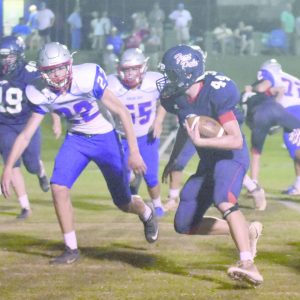 On Tuesday, Aug. 28 the Fort Dale Academy Eagle JV team beat the Macon East Academy Knights 32-28. Playing with a home field advantage the Eagles did not disappoint the crowd and managed to hold the Knights in check.

Coach Marshall Watts said, “After several weeks of practicing, we were excited to face an opponent other than ourselves. Although our player numbers are a little low, the guys we do have out there have really worked hard and are starting to understand they will be called on to play several positions.”

The offense was led by Jacob Foster who had over 200 yards rushing and four touchdowns. Braxton Kimbro led the Eagle defense with double digit solo tackles.

Watts added, “The offensive line really showed the ability to make in-game adjustments which is very promising. We will play a very good Escambia Academy team on Tuesday without several key players who suffered injuries in the Macon East game.

“We have talked about taking the next guy up approach and having other players step up and have a bigger impact in the game.”

The Eagles travel to Atmore on Tuesday, Sept. 4 to square off against the Escambia Academy Cougars. Kickoff is slated for 7 p.m.