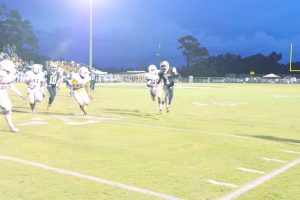 The Greenville Tigers came up a little short Friday Night. The Wolverines of Carver High School were in town to square off against the home town Tigers. Despite the inclimate weather the crowd was out in full force.

It was a defensive struggle for both teams with mounting penalties in each camp. The game remained scoreless until 11:05 left second quarter when Tiger Aric Bogan swept the corner for six points. The first half rested with Greenville claiming the lead 7-0.

The third quarter however belonged to the Wolverines. They scored 18 points and only allowed Greenville six, after blocking an extra point attempt. The score was 18-13.

The Tigers tried to mount a fourth quarter rally but an interception deep into Carver’s territory seemed to put starch back into Carver. The Tigers got close but time was not on their side and at the buzzer Greenville fell 18-13.

Greenville travels to Tallassee to face their purple and gold Tigers next Friday night. Tallassee, which is coming off a non-conference win against Hadley, should make for an interesting cat fight.