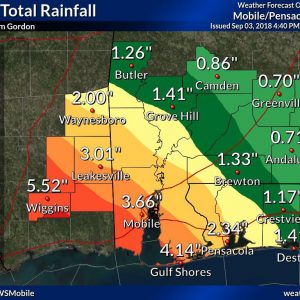 Gordon is now forecast to be a minimal hurricane at landfall. A hurricane warning is in effect for coastal Mobile and Baldwin counties and the adjacent coastal waters.

Tropical storm warnings are in effect for coastal northwest Florida and inland Mobile/Baldwin, and portions of inland southeast Mississippi.

Conditions will begin to deteriorate along coastal areas by as early as midday Tuesday with conditions deteriorating inland Tuesday afternoon into Tuesday night.

The probability of tropical storm force winds will continue to increase through Wednesday morning. The chances of experiencing tropical storm force winds: coastal Alabama and inland southeast Mississippi are 7-8 in 10; in northwest Florida, the threat is 2-6 in 10 (which may be highest closer to Alabama/Florida line); for inland, southwest Alabama, they face a 2-7 in 10 with a sharp gradient that increases closer to Mississippi.

There is now a 1-2 in 10 chance of hurricane force winds along coastal Alabama and southeast Mississippi.

With Gordon forecast to be a small, Category 1 hurricane, the hurricane force winds will only impact a very limited area right around the center and primarily along the immediate coast.

Butler County could expect to receive up to 1-inch of rain. The threat for tornadoes in our area is marginal.