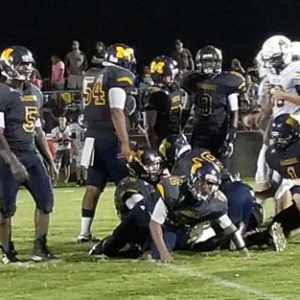 They are all piled up. (Ray Van Cor | The Standard)

The McKenzie Tigers faced off against down the road 1A Red level Friday night. McKenzie coming off of two previous losses, and suffering injuries to the roster were hoping to pull off their first victory. The first half was a defensive struggle ending in a 6-6 tie at the break of halftime.

The second half was marred by penalty after penalty with very little offensive production on either side. An interception in the third quarter by McKenzie’s Adarius Davidson for a touchdown was called back for a block in the back, followed by a fumble which resulted in a six yard loss and then another illegal procedure call.

Red Level, with 4:52 left in the fourth quarter scored and missed the extra point attempt making it a 12 – 6 ballgame. McKenzie struggled but couldn’t move the ball and finally with 1:56 on the clock Red Level started taking a knee and at the buzzer Red Level walked away the victor winning 12-6.

This Friday night the Tigers play host to county 1A rivals Georgiana Panthers at home. Georgiana comes in with a record of 2-1 with the latest win over Florala 35 – 28 and only one loss to 2A Luverne. This should and always does make for an interesting cat fight.