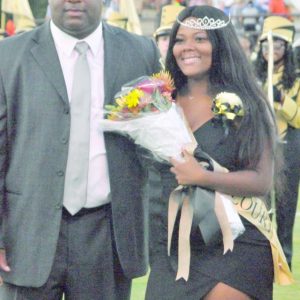 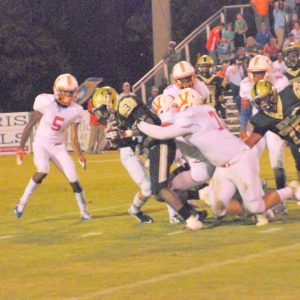 Tiger Bishop Riley runs through a herd of Rams. (Clay Branum | The Standard)

This past Friday night was Greenville High School Tiger’s homecoming game. It was a hard fought game but they won 14-7 against the Valley Rams.

Senior Ms. Jamaya McNeil was crowned homecoming queen this year for Greenville before the game.

The Tigers scored early in the game with Javion Posey throwing a 22-yard pass to Aric Boggan for a touchdown in the first quarter. The next big play for Greenville would be a defensive effort by Sawyer Hennis with a big sack against the Rams.

The Tigers scored again at the end of the first quarter with Posey rushing for an 8-yard touchdown. Greenville led the Rams 14-0 until the last minute of the third quarter with Valley making a short touchdown pass but.

Tempers on both teams flared in the fourth quarter and after a flurry of yellow flags Tiger linebacker Ikyekah Jackson was ejected from the game.  Greenville would hold off the Rams try at a late scoring drive and then successfully run out the clock.

Greenville is now 2-0 in region play with an overall record of 3-1. The Tigers will play away against Rehobeth this coming Friday. Kickoff is at 7 p.m.