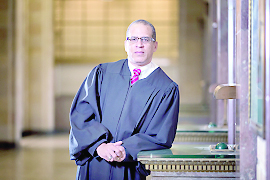 President Donald Trump has nominated U.S. Magistrate Judge Terry F. Moorer to serve a lifetime appointment as a federal judge for the U.S. District Court for the Southern District of Alabama in Mobile according to a Thursday, Sept. 7 announcement from the White House.

Moorer was born in Greenville in 1961 and graduated from Greenville High School in 1979. He currently serves as a Magistrate Judge on the U.S. District Court for the Middle District of Alabama, a position he assumed in 2007.

“He is one of very few African American Trump judicial nominees,” said Carl Tobias, a professor at the University of Richmond School of Law who follows judicial nominations. Trump had previously announced in May that he intended to nominate Moorer for an unspecified seat on the bench.

Moorer earned his Associate of Arts from the Marion Military Institute, his B.A. from Huntington College, and his J.D. from the University of Alabama School of Law. Moorer’s nomination will have to be confirmed by the U.S. Senate.

His nomination was among 16 judicial nominations announced by the White House on Sept. 7. Three others nominated from Alabama to fill federal judgeship vacancies are: Jeffrey Uhlman Beaverstock, Emily Coody Marks and Brett Joseph Talley.