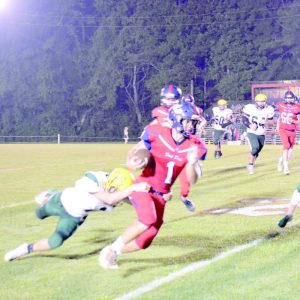 FDA running back Cade Coker is in the grips of a Sparta Warrior as he turns the corner for a nice gain. (Bruce Branum | The Standard) 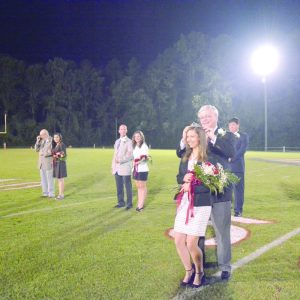 FDA head coach James ‘Speed’ Sampley said the team had been able to get out in front of Sparta early in the game and contributed the win to the full team’s efforts.

The Eagles have seven seniors this year, the smallest class Sampley said he has seen since coming to the school 20 years ago. Seniors Taite Watson, William Luke Hendrick, Matthew Hood, Dakota Berrey, Wyatt Fullington, Torin Buntz and Richard Till have seeded the team this season. Sampley said while he has stressed to his seniors to give the season their all, he reminded underclassman the debt they owe the seniors.

“I try to tell the younger kids, they’ve got another year, but they owe the older guys everything you’ve got because they only have these games,” Sampley. “They’ve been told that so many times, so they know it’s coming to an end. They know they only have so many nights out there and they’ve got to take advantage of them.”

Sampley said while he had seen expected progress from the athletes as the season has progressed, the team would need to continue maintaining its performance and bring a bit of consistency to its gameplay if they wanted to continue its success.

“We threw the ball better last night,” Sampley said. “We got the ball out a little quicker and caught some balls. We ran 43 plays last night in the game, and we usually run 65 or more. When you’re winning, you would think you’d run more plays, but we scored pretty fast.”

The Eagles will look to face Hooper next week on the road, and Sampley said he hoped to continue to see the team play well, ensuring they are tackling and preventing as many turnovers as possible.

“We’ve got to be able to carry that over this week,” Sampley said. “Hooper is a team that has struggled about like we are to some extent, and we both need a win. We’ve got about to play better than them if we want to win. We’ve got to keep from turning the ball over and tackle.”