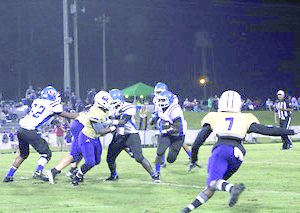 The Georgiana Panthers traveled to Pike County last Friday night and bested the Goshen Eagles in a 30-13 matchup. Panthers head coach Ezell Powell said the whole team had played well despite the weather and homefield advantage for the Eagles.

“We are getting to the point now where we’re executing on both sides of the football, like you want to,” Powell said. “We’re learning to take what we’re working on in practice and we are bringing it out here when teams throw things unexpectedly at us or that we haven’t practiced. We’re doing a good job at adjusting to it and stopping them. We’re learning how to finish ball games and not let things hang around.”

The Eagles got on the board early Friday night, scoring in the team’s first offensive play of the night. Powell said a missed assignment had created the opening for the Eagles to score, but the Panthers defense adjusted from there and Powell said he did not see the same mistake twice.

“I knew what we had go wrong,” Powell said. “I knew my running back didn’t field his position right there. So, when I told him, he didn’t play his spot. He came back and he played it and we started to stop their players. And, that’s what I’m talking about when we make a mistake, we understand what we went wrong, let’s correct it so we can be successful on defense, and that’s what they did.”

The Panthers took advantage several times on small mistakes from the Eagles, including the Panther’s first score of the night as Kendall Long scooped up a Goshen fumble and carried it into the end zone with 8:04 left in the first quarter. The Panthers would again score once more in the first quarter and again in the second quarter before heading into the half leading the Eagles 17-6.

The Panthers scored again late in the third quarter edging the Panther’s lead 24-6 over the Eagles. With nine minutes remaining in the fourth quarter, Georgiana scored its final touchdown but missed the extra point.

While Goshen managed to score with eight seconds remaining on the clock, it was not enough for the Eagles. Powell said the team’s concentrated effort on both sides of the ball had driven the team to its win.

“Offensively, we collectively did a good job,” Powell said. “We made some adjustments up front on the offensive line that kept them out of the backfield on us that allowed us to be able to run the football, which I thought was a bright spot for that group.

“Defensively they were all over the place. It was a collective group. Everyone played well at their spots, and when you play well at your spots like that you are able to keep them out of the end zone. I think the defense as a whole played well.”