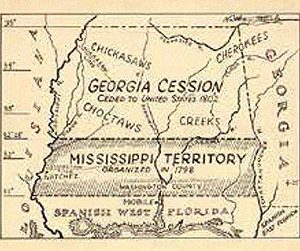 A map from “public” maps of the internet:

This coming year Alabama will celebrate her bicentennial and the small, “Church that would not die”, Mt. Moriah Fellowship Baptist Church that sits “dab-smack” on the Wilcox and Butler County line, will be celebrating the 190th anniversary of its founding in 1828. Annually for approximately the last 30 years, the writer has written a short history of some aspect of the life of the church for its annual Homecoming, using as the springboard of thought the words from the original records. This year, the inspiration is found among the records of the lives of those whose tombstones are in the church cemetery, or if there is no tombstone, in the historical records of the Mississippi and Alabama Territories that state that they are buried in that
hallowed ground. Many of the early members of the Mt. Moriah Church arrived during the
Mississippi Territory days (1798-1817). Some others came during the Alabama Territory days (1817-1819), before Alabama’s Statehood. At least a dozen of them (and others unknown to the writer) are buried in the Mt.
Moriah Cemetery with most of their tombstones easily identified. Not all, however, have marble or granite headstones. At least one who is buried there is only known from an early, contemporary Greenville, Butler
County newspaper article describing the funeral at the Mt. Moriah Cemetery of one of the highly respected gentlemen of the area, Col. Richard Warren. He lies in an unmarked grave. Before noting some of those stalwart pioneers buried in the Mt. Moriah Cemetery, a brief “remedial” thumbnail history on this area’s journey to Statehood is helpful to describe how this early trickle of pioneers became a flood of settlers called “Alabama Fever.” At the end of the Revolutionary War, pioneer settlement began in many areas. After a series of international treaties, the United States formed the Mississippi Territory on April 7, 1798 which encompasses all of the present states of Alabama and Mississippi lying above 32 degrees 28 minutes – this was claimed by Georgia under her royal charter and extended westward to the Mississippi River. Few people tried to settle these lands during the international conflict of claims. And the Creek Indian Nation, another matter, had not ceded any territories to the U.S. in this area. In 1802 Georgia ceded to the United States all of her lands that had been in her charter as far westward as the Mississippi River and which were directly above the Mississippi Territory. When the U.S. purchased the Louisiana Territory from France on Dec. 20, 1803, they needed to establish a land route between Washington and New Orleans for the movement of troops and supplies, since the U.S. and Great Britain were still at odds: America wanted landlines to the coast. Nov. 14, 1805 the Creek Nations and representatives of the U.S. Government met in Washington. The Creeks gave permission for a “horse trail” through their lands to ease the journey from Washington to Mobile. Already established, the Great Pensacola Trading Path (Old Wolf Trail) crossed this “horse trail” at a location known for its many springs,
Burnt Corn Creek, which was known by both the Creeks and the settlers as a good place for stagecoach, horse, and foot travelers to stop. These two routes soon became the main street of the village that developed at this major crossroads. The “horse trail” later developed into the Federal Road that continued to New Orleans, with many shorter side routes to the various Post Offices throughout the territory. Many Creeks and whites settled at this crossroads.