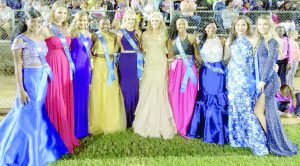 It was Homecoming for the black and gold Tigers of McKenzie Friday night, facing off against the Wildcats of Florala who made the long trip from the Florida line for conference play.

The Wildcats 2-5 on the season were coming off an impressive offensive victory 68-26 over Red Level. They picked right up where they left off, but the gritty young Tigers made it close match for two quarters of play. At the half the score lay 29-16 Florala.

McKenzie managed to put 13 more points in the tally books before the final buzzer alas it was Florala 63-29. McKenzie travels to Brantley to take on the 4-3 Bulldogs in another conference game next Friday night.

The Green and White Bulldogs are coming in with a 53-14 victory over Red Level.