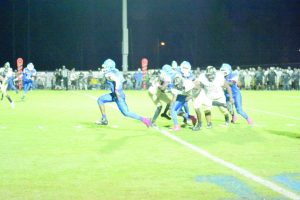 Georgiana’s Kyle Powell breaks free from the line and would manage to score. (Bruce Branum/The Standard)

The Georgiana Panthers came away with a key home game win in their region last Friday night, defeating the Elba Tigers 35-27.

It was a back and forth game for the entire four quarters of play. Georgiana’s Chris Mixon took the initial kickoff for 90 yards to make the first points of the game.

Elba then followed suit with a sustained drive and tied the ball game 8-8. From there, it was a hard hitting offensive struggle.

With less than a minute to play in the game Elba had the ball but just couldn’t manage to find the end zone, leaving the Panthers at top of the region.

Head coach Ezell Powell was proud of his offense and encouraged that his defense managed to hang on to deny the Tigers a last minute touchdown.

The Panthers will now travel to face Kinston for another area game. Kinston’s record is 2-5 overall and Georgiana is expected to win.

With the win over Elba, the Panthers record improved to 7-1 overall and 5-0 in region play