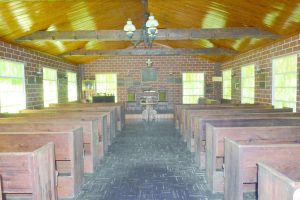 By 1817, Mississippi, as shown by US Census, soon had the requisite population for Statehood.  At that time the eastern part of the former Mississippi Territory became the fairly short-lived Alabama Territory.

There were wonderful offerings of new land for sale for those who would venture there to settle.   “Alabama fever” became the name by which this migration of pioneers was called.  Alabama Fever called many to this area preceded by a number who had arrived during the years of the Mississippi Territory.

A short two years later, during the Presidency of James Monroe, on Dec. 19, 1819 the Alabama Territory had the requisite population by Census to become the State of Alabama. Some of the early pioneers had been known historically, some were family men and women, some were speculators, some were adventurers, and some were in multiple categories of description.

All wanted to have part in the “new land” that was Alabama. All had been infected with the “Alabama Fever.”

The first county of the new state and the large “mother county” of later counties, Monroe, contained almost a third of the land mass of Alabama.  It extended from the Florida border, northward to beyond Cullman and from near the Tensaw Swamp to the Georgia border at the southern end of the state.

The earliest known pioneer of the cemetery was Col. Richard Warren who was born in North Carolina in 1763, served in the Revolutionary War, and then moved by 1785 to Burke Co., Georgia for about a decade.

This military man, who by 1803 was in the Mississippi Territory around the time of the Louisiana Purchase, was found the same year living in Conecuh County where he built Fort Warren, sometimes called Fort Burnt Corn, in the Pine Orchard Community.

He built Fort Warren to give shelter to the white settlers there for their safety in times of the frequent Indian uprisings; it is about six miles from Burnt Corn where in 1812 the Battle of Burnt Corn (referred to as a “skirmish” by many who were there) led to the Creek Wars of 1813-1814.

By 1830 he had moved to Butler County and at his death on July 4, 1835 he was buried in the Mt. Moriah Cemetery in an unmarked grave. Proof of his burial in this cemetery is found in a Greenville, Alabama newspaper written a few days after his death in which a tribute and a description of his funeral was made by one of the attendees. His wife was Sarah Brewer.

They had at least three sons and a daughter.  His children were all born in this area during the Mississippi Territorial days. His daughter, Mary, married James A. Powers, Jr. who lived not far from the church.

The sons were Laban, Malakiah, and Robert.  All were shown on the Tax List of 1818 along with their father, as being in Conecuh Co. in the Alabama Territory.  The writer does not know the surnames of the wives of the sons or any other information about them.

The second earliest Mt. Moriah pioneer of record to settle here was James A. Powers, Jr. who was born in 1785 in Georgia.  Before July 6, 1813, he was a resident in the eastern part of the Mississippi Territory (which later became Alabama) when he married Mary Warren who was born in 1795 in the part of Georgia that became the Mississippi Territory in 1795.

Mary, was the daughter of Col. Richard Warren. Land records show he was a landowner and a planter having land in both Butler and Wilcox Counties. The home he and Mary, built was a large colonial home in Wilcox County on the Wards and Grimes Mill Road between Mt. Moriah and Pine Apple.

It burned long ago, but in the 1970’s the original barn was still standing. It has been surmised that he may have been a physician from the evidence of medical books and medicines that were listed as part of his estate inventory.

He evidently had some chronic illness.  His tombstone tells this story: “Afflictions sore for years I bore. Physicians were in vain.  At length God chose to give me ease, And freed me from my pain.”

However, he was evidently well thought of, for the same tombstone bears this message:  “Mark the perfect man, and behold the upright, for the end of that man is peace.”  He died in 1859.  In the 1860 Census Mary Warren Powers was listed as a widow, as a “Lady,” and as having been born in 1795 in Georgia.

Her only daughter, Frances Powers Yeldell, had just died and Mary was living in the home of her daughter, helping take care of the three little grandsons.  She lived for some years with her son William A. Powers and his family, dying 15 years into her widowhood in 1874. Both are buried at Mt. Moriah. Their six children intermarried with the surnamed families Peaster, and Yeldell.