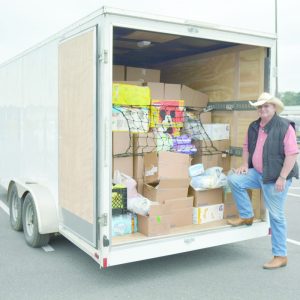 Hope Afield, director, Ken Kilpatrick is pictured with a 16 foot trailer filled with foods and supplies. (Bruce Branum | The Standard) 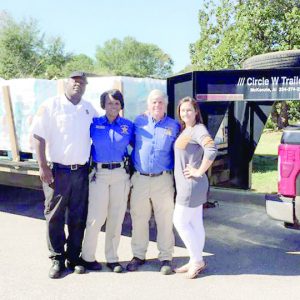 Hurricane Michael relief efforts continue to be literally poured from Butler County to the affected areas hit by the catastrophic hurricane.

The supplies were delivered on Thursday, Oct 18. Harden stated he wanted to thank all those who made donations, which were many. “We are beyond grateful for the response we received from the people of Butler County. Thank you all so very much for your donations, we know that the ones receiving everything gathered will be thankful,” said Harden.

Hope Afield CEO and founder, Ken Kilpatrick, also made a delivery of water, MRE’s, and cleaning supplies and products to Donalsonville, Ga. on Saturday, Oct. 20.

Donalsonville, which is a rural community about 30 miles east of Dothan was also hard hit by the hurricane and Kilpatrick stated that he wanted to help out a rural area.

Other contributors to the relief efforts of Kilpatrick included, the Davenport Church of Christ, Greenville Church of God, Ronnie Paulk who took barrels of gasoline, Al and Dale Brannon, Chris Mosely and Johnny Waller who traveled with Kilpatrick to help unload the supplies.

In all Kilpatrick believed he had close to $20,000 worth of supplies which he and others would deliver to Donalsonville. The Montgomery Food Bank donation was approximately equivalent to $16,000.

“It is tremendous what this community is doing for others in need,” said Kilpatrick.