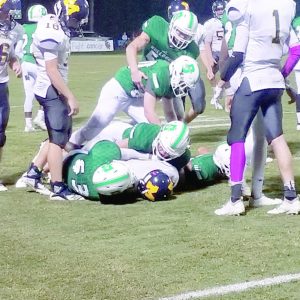 A McKenzie runner is plowed under by a pack of Brantley Bulldogs. (Ray Van Cor | The Standard)

McKenzie fell prey yet again to another conference opponent 53-7 under the Friday night lights, the Brantley Bulldogs.

The bewildered Tigers managed to cross the goal line once with a pass reception caught by Kameron Daniels and put  up six points,  with the extra point making it seven in the first quarter.

As Paul Harvey once said, “And now the rest of the story.” The half gave way with the Bulldogs leading 39-7.

The struggling Tigers put up a fight and even drew the admiration of some of the Brantley faithful who worked the McKenzie side line. One of the gentlemen patted one of the McKenzie players on the back and was overheard to say “You’re doing well, just keep playing.”

On the lighter side, the game clock had failed and the announcer made note of it and announced the buzzer was done for as well, and then he proceeded to make the buzzer sound. He announced the game had ended the final score was 53-7 Brantley.

McKenzie heads to Elba next Friday night where Elba is coming in with a 41-6 victory over Red Level.