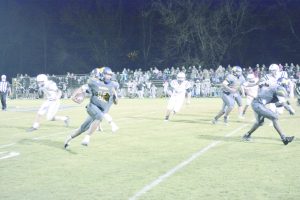 Above is McKenzie Tiger Quindario Lee skirting the outside edge for a significant gain against Beulah. At right is GHS Tiger quarterback Javion Posey being led by Justice Palmer for a big gain against Stanhope Elmore. (Bruce Branum | The Standard) 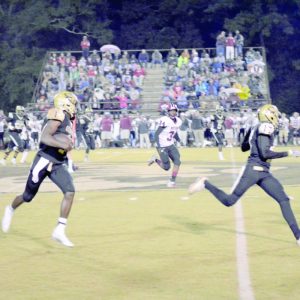 The last two football games of the regular season were played in Butler County this past Thursday night.

The Greenville High School Tigers faced off against Stanhope Elmore and came away with loss 33-9. It looked like the Tigers were going to make a strong effort in the first quarter but as the game wore on the Tigers were on the losing end.

Before the game, 19 seniors of the football team were recognized, along with cheerleaders, and band members.

Greenville earned a spot in the playoffs and will either face Parker, Wenonah, or Fairfield in Greenville on Nov. 9. The Tigers are ranked No. 6 in AHSAA Class 5A and finished the regular season with an 8-2 record.

McKenzie also fell to Beulah on Thursday night after holding their senior recognition activities. The extremely young Tigers lost to Beulah by a score of 54-7.

Of the 33 players listed on the roster for McKenzie, 22 are in the 10th grade or below.

It’s been a tough year for the young team but they are growing indicated head coach Tony Norris.

There only win came against J.F. Shields in the fifth week of the regular season. The Tigers finished 1-9.