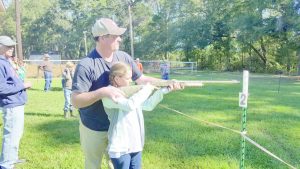 The purpose of the shoot was to raise funds for sponsorship of the Boys/Girls State program. During previous years the Post had used funds from the rental of the Post building to send four boys and three girls to Boys/Girls State during June of each year to the University of Alabama.

However, due to the inappropriate behavior of guests of the post building the rental program was discontinued during 2018.  Therefore, a new source of funding was needed similar to 2012 when local civic clubs provided funds.

The Post leadership decided to conduct a turkey shoot rather than seeking funding from the civic clubs.  Post Commander Garry “Ranger” Newton organized the shoot with the support of veteran members of Post 24. The shoot was an overwhelmingly supported by 40 merchants of Greenville with prizes for the participating shooters.

These merchants are listed below:

Post 24 not only thanks these merchants but also encourages local citizens to support them by shopping at the various locations.  More than 50 enthusiastic shooters competed in the 15 rounds of completion prior to the final grand prize shoot.

Shooters came from as far as Baldwin County. During the grand prize shoot, Master Ward Hickman won the grand prize of a trophy deer hunt provided by Hollywood Outdoors Farm guided by Wesley Hollingsworth of Lowndes County. The runner-up shooter was John Sexton who won a whole smoked turkey provided by Bates House of Turkey.

The other excellent prizes provided by the above listed merchants are too numerous to list.  However, nearly every shooter received a prize. Several young shooters will be enjoying ice cream and pizza during the coming days.

Thanks to contributions of food and drinks a concession stand was provided for the shooters, family members and veterans. Sam Glasgow, Post 24 member, operated the stand.

The DJ announcer for the shoot, Derrick Burgans, kept each shooter informed as the various segments of the shoot unfolded. A special thanks goes out to the Central Volunteer Fire Station for providing the facility.

Thanks to the support of local merchants, shooters and veterans the shoot produced more than $800 dollars for the Boys/Girls State program with several other contributions pending. Post 24 is planning to make the turkey shoot an annual event.

Turkey shooters mark your calendar for the first Saturday in November which will be November 2, 2019.  Local newspapers and radio stations will keep you informed.