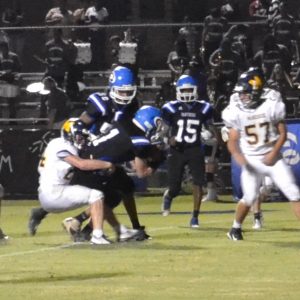 Georgiana Panther running back, Bryant Mitchell fights for a touchdown against the McKenzie Tigers. (Kristy Houston | The Standard)

The Georgiana Panthers defeated the McKenzie Tigers 52-21 in a cross-county rivalry conference game. The Tigers scored a total of 7 points in the first quarter, while the Panthers scored 16.

The Tigers answered in the second quarter with 14 additional points; however, the Panthers put another 16 points on the board continuing to hold its lead.

The Fort Dale Eagles continue a winless season falling 49-3 against the Macon-East Montgomery Academy Knights. The Eagles scored the team’s only three points in the fourth quarter, while the Knights scored consistently through the AISA AAA Region 2 match up.

The Eagles will look to recover in its next match up against Success Unlimited. Success Unlimited is 1-2 for its season and most recently fell 34-6 against Monroe Academy in a conference game.

The Greenville Tigers fell to the Valley Rams in a close match up 20-14 in a conference game. The Tigers overall record evens out to 2-2 while the Tigers are 1-1 for its region. With the win, Valley’s record improved to 2-2 overall and 2-0 for the region.

The Tigers will host Rehobeth in a conference game for homecoming this Friday. Rehobeth recently won against Beauregard 33-21 and improved its record 2-1 overall and 1-1 for the region.