He has been with WSFA for 11 years and was contacted by Ken and Jan Kilpatrick to speak at their annual benefit dinner.

The Benefit Dinner is an annual event Ken and Jan hold to support their mission of aiding underprivileged or struggling youth in the Butler County area.

The program has always been a success according to Ken, even before establishing their program of hope in Butler County.

Their mission is to work with at risk kids in the great outdoors.

Johnson said his message was about decisions and drugs. “I’ve learned so many hard lessons trying to help my brother, and it would be a shame not to spread that message,” he said.

Johnson stated his brother developed an opiate addiction after a knee injury and died four years ago in October to a heroin overdose.

He added that he speaks to many schools throughout the year with his message that there is hope.

Johnson said that Jeff Shearer, a former sports director for WSFA, gave him the following advice, “Turn your misery into your ministry and those words changed my life.”

Johnson has spoken to over 35,000 students since then, and typically speaks to 80 to 100 schools every year.

He relayed that opiate addiction in Alabama and other states is a serious affair. He is trying to retool the opiate message and get the word to the younger generations before they become adults.

He specifically concentrates on middle and elementary schools students for that reason.

“The war on drugs doesn’t need to be the war on people. We need to love people and get people in and love on them and talk to them. But it is easier said than done,” said Johnson.

Car burns up on I-65 southbound shoulder

Georgiana has a pharmacy again 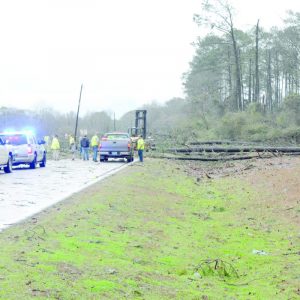