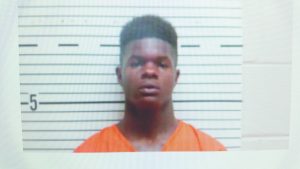 Greenville Police Chief Justin Lovvorn took to twitter a little after 9:30 p.m. on Wednesday night to inform the public of a recent shooting. “Shooting tonight in the area of Perdue Place leaves one victim with gunshot wound and an 18 year old in custody for Attempted Murder” Justin Lovvorn @justin_lovvorn.

Jamoney Moore, 18, is being held in the Butler County Jail on a $300,000 bond for attempted murder. On Wednesday night local authorities were dispatched out to a call on Perdue Place were two rival groups were already in a heated argument. This is not the first time Greenville Police Department has been called to settle conflicts between the two groups. The witnesses of the event are all juveniles, with the victim and the shooter being the only people involved over the age of 18. The groups have been known to get into fights repeatedly, even while in school. This has been an ongoing issue with these teens for some time now.

Laricky Scott, aka Shmoney Rick, 18, was taken to L.V. Stabler Memorial Hospital for treatment of two gunshot wounds to the back. He was life-flighted to Birmingham where he is reported to be in stable condition. Friends of Scott uploaded photos to Facebook showing Scott lying in the hospital bed.

As of now the reason for the argument is still unclear and the case is still under investigation. According to Officer Disney, the crime rate for this area is actually down just slightly from this time last year. 911 calls tend to increase during the summer months and holidays while they usually decrease when the kids go back to school in the fall.

So far this year, this is only the second crime involving a gun shot, with the first being the only murder of the year. “We are trying to get these kids out of this mindset of violence. The laws are not as strict on a juvenile as they are once they turn 18 and become an adult” stated Disney.

As an adult First-degree attempted murder carries greater penalties and often means a life sentence with the possibility of parole. Whereas, if the juvenile is fortunate and the case stays in the juvenile court, he or she can expect to go to a high risk juvenile program. With the ongoing investigation into the two groups, there could possibly be more charges and arrests made in the near future.