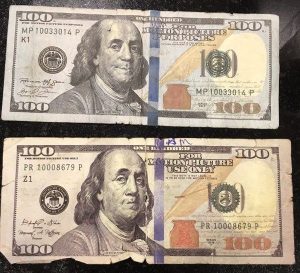 Greenville Police Chief Justin Lovvorn, as of this past Friday, said four counterfeit bills have been turned over to the police department in the last week.

A local bank turned the fake cash over to police after businesses tried to make a deposit with the fake money.

“In this situation, it was really easy to detect they weren’t real because they were marked,” Lovvorn said.

The fake money was marked with text on the front and backindicating that the money was only to be used for motion picture purposes.

“It’s worth the extra minute to look at the bill and check,” said Lovvorn. “It could keep your business from losing money.”

While police believe the fake money came from the same place, Lovvorn said this scam is not new to the department. “We’ve seen this before. In past cases, it has been much harder to tell.”

Lovvorn said his department has bills that were actually real at one point, including, a five-dollar bill that was white-washed and printed over to resemble $100.

One way to determine if paper bills are fake is by using a flashlight to shine bills. The original image will show and you can determine what the bill was originally worth indicated Lovvorn.

“The newer hundred dollar bills also have a glittery, shiny appearance to them,” Lovvorn said. “You can look at that. You can also use a special pen to see if the bill changes the ink.”

Lovvorn urges businesses to be on the lookout for fake money and do the proper checks to ensure the money received is legal tender.