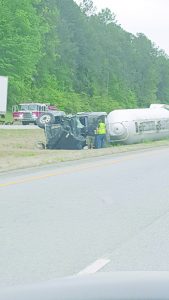 An 18-wheeler truck and tanker is pictured turned over while wrecker service personnel inspect. (Submitted photo) 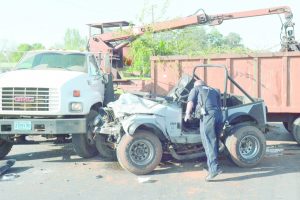 A Greenville Police Department officer inspects the vehicles involved in a Thursday morning wreck at the intersection of Hwy 31 and South Conecuh Street. (Bruce Branum | The Standard)

A wreck at the intersection of South Conecuh Street and U.S. Highway 31 claimed the life Timothy Ray Mills, age of 21, on Thursday, April 12.

Mills was traveling by himself and headed south on Hwy 31 in an older model jeep 4×4 when he struck a City of Greenville limb truck.

The city vehicle had made a partial a partial turn north onto Hwy. 31 when it was struck by the Jeep which Mills was driving. LifeFlight services were called for Mills but he was transported to L.V. Stabler Hospital after he developed complications from his injuries to which he later succumbed.

No one was injured in the city vehicle.

The accident is still under investigation by the Greenville Police Department with the assistance from Alabama Law Enforcement Agency.

In a separate accident on Saturday afternoon of April 14 which occurred on I-65, Greenville Police Chief Justin Lovvorn stated in a tweet, “The Greenville Police Department is working an accident on I-65 north bound at the 131 mile marker involving an overturned 18 wheeler. Please find an alternative route if you are traveling north. Roadway is passable but very congested.”

The wreck had traffic backed up of I-65 North for several hours. According to a witness which came upon the scene, they thought another vehicle had been struck by the 18-wheeler during the accident. The accident is also still under investigation.