BY BRUCE BRANUM
The Greenville Standard 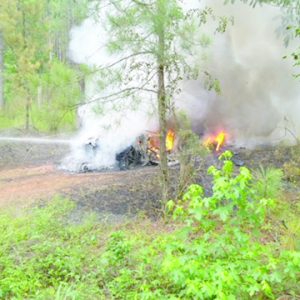 2018 Nissan Altima was found on fire near the Georgiana I65 exit Saturday afternoon. The Georgiana Fire Department responded to put the
fire out. It is has been tied to the homicides. (Photo submitted)

Butler County Sheriff Kenny Harden has reported there was a double homicide of two males near Garland in Butler County on Saturday, June 3. Harden received a call from a subject Saturday afternoon who had noticed two lifeless bodies off a dirt road. Harden met the subject and they went to the scene. Harden confirmed the dirt road as Dilly Hill Road. Also, around 4:15 p.m. Lt. Jeremy Peagler of the Georgiana Police Department noticed smoke west and near the Georgiana US Highway 65 exit. He found a car on fire on Tram Road just off Alabama Highway 106.
Peagler reported the fire to the dispatch center and they notified the Georgiana Fire Department who responded to put out the fire, according to Georgiana Police Chief Carlton
Cook. After finishing investigating the homicide scene, Harden stated they investigated the car and found that the car belongs to one of the victims. The vehicle was a 2018 Nissan Altima and dark grey in color. The bodies of the victims have been sent to Alabama Department of Forensic Sciences for autopsies to be performed. Harden said he was not able to release the names of
the victims until the bodies have been identified and family members notified. Harden stated the agencies involved in the investigation are the Butler County Sheriff’s Office (BCSO), Attorney General’s Office, Sheriff Departments with Conecuh and Covington County, State Bureau of Investigation and Alabama Law Enforcement Agency. He also indicated they are investigating if there were ties from the homicides in Butler County to a homicide early Saturday morning, June 2 outside Soggy Bottom Tavern in Red Level. He is also asking anyone with any information on the homicide or the car please call the BCSO at 334-382-6521.