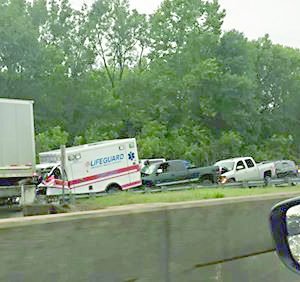 Over the course of one week, 21 wrecks have occurred near mile marker 138 of U.S. Interstate I65.

On Monday, July 2, a 10 car pileup occurred which included an 18-wheeler, an ambulance and several other vehicles.

A total of seven people had to be transported to L.V. Stabler Memorial Hospital from the pileup. Four were from an ambulance that got pushed under an 18-wheeler by the vehicles following behind. Three were ambulance personnel and a fourth was a cancer patient being transported by the ambulance.

The northbound lanes of I-65 were blocked for approximately three hours. The cause of the crash is still being investigated by State Troopers.

In addition, two cars wrecked in front of the pileup after witnessing the wreck behind.

On Saturday, July 7, another eight car pileup occurred at approximately the same location.

On Sunday, July 8, an individual car flipped in the same area. Heavy rains in the area are suspected to be the cause of the increased number of wrecks.

The Alabama Department of Transportation has repaved the area in previous years.