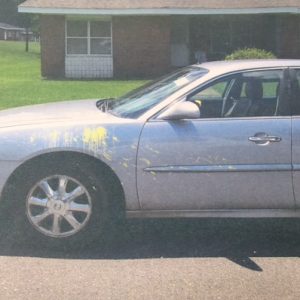 On Tuesday, July 10, police officers began to receive complaints of paint on vehicles in the area of Carver Circle and the surrounding area late that night.

According to Greenville Police Chief Justin Lovvorn, the paint appeared to be the type purchased for use in painting on a canvas.  Officers located over twenty vehicles from the area that had paint smeared on them.

Area residents along with the responding officers attempted to clean off the cars before any real damage was done. Only two cars involved ended up having damage that could not be fixed by cleaning the car.

Officers then filed a report for each victim. Investigators responded to the scene and began to collect evidence from the various cars that had been affected.

Within the next twelve hours, investigators were able to identify at least five suspects who were involved in putting paint on vehicles that night.

Three were found and brought in on Wednesday, July 11. They confessed to their involvement after they were confronted with the evidence against them.  Two more individuals were picked up on Thursday, July 12 and also confessed to being involved in the crime.

The two juveniles, whose ages were between 15 and 17, were charged with two counts each of Criminal Mischief 3rd.

Lovvorn said, “I am very proud of the way our officers went out of their way to assist the victims in cleaning the paint off of the vehicles in order to prevent a much worse situation. The residents of this area worked hand and hand with the officers to clean every car, even if the victim could not be located.

“This is why only two vehicles had lasting damage out of over twenty vehicles involved. I would personally like to thank each and every person that came together to assist their neighbor in a time of need.

“That is the kind of community that makes all of us proud to live and work in this great city.  I would also like to commend the hard work and time put into this case by the Investigations Division. They were able to quickly develop leads in this case and locate and arrest those involved to bring them to justice in a timely manner.