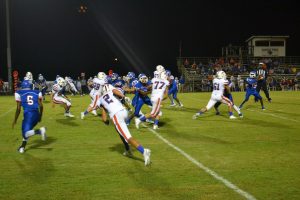 Georgiana quarterback Azenda Pennington gets ready to pass downfield as the offensive line gives him protection. (Clay Branum | The Standard)

What is a team? A team is not a single person working, but a collaboration of many working together.

The Georgiana Panthers showed the attendees of Friday night’s game what it truly means to be a part of a team and work together for the common goal.

The Panthers stepped onto the field with victory in their sights early in the game, leaving the Kinston Bulldogs trailing by 52 points at the end of the first half. Solidifying their defense, Georgiana denied the Bulldogs anymore points on the board after just the first quarter.

The Panthers as a whole rushed for 378 yards and 6 touchdowns. While QB Jamichael Stallworth ran the ball 3 times for 81 yards and a touchdown, Christian Williams stretched out a carry for 53 yards to add another touchdown to the Panther’s score.

Both Lecedric Haynes and Chris Mixon rushed in for scores tacking on 12 more points, proving just how a team as a whole can work together. Special team player Detevious Likely returned a punt for a touchdown and Chris Mixon snagged an interception on defense which he returned 40 yards to the end zone giving him two for the game.

Albeit the score, Georgiana’s defense showed just as much tenacity in game as their offense did to stop the Kinston Bulldogs from grabbing any hold on the field after the first quarter with defensive players Jecary Brewer and Lecedric Haynes boasting 2 sacks each during the game.

At the sound of the play clock hitting zero with the horns blaring, Georgiana walked off the field in a landslide win 60-8.

Panther’s Head Coach Ezell Powell commented “We have no complaints with the performance of our team tonight, they played well.”

The Panthers will be at home again this coming Friday to stack up against the Brantley Bulldogs at 7 p.m.