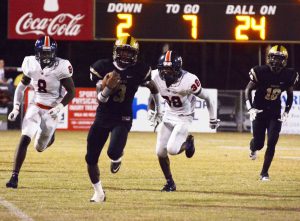 The Greenville High School Tigers showed an iron will to overcome several issues on the field this past Friday against the Charles Henderson Trojans. With the Tigers throwing up the first points on the board and after a few back and forth struggles with the Trojans, the challenge was on for Greenville.

Both Greenville and Charles Henderson teams fought for dominance of the score board the first and second quarters. GHS running back Arrick Boggan would be the first to cross into the end zone, giving Greenville 8 points after the successful attempt at the extra points.

Before the first quarter closed the Tiger’s offense botched a snap giving Charles Henderson an easy touchdown ending the quarter 8-7. Continuing into the second quarter the Trojans push hard down field to set the score in their favor 14-8.

During the first half, starting quarterback Javion Posey was injured which prevented him from finishing the half and leading to defensive back Bishop Riley stepping into the QB position for the remainder of the game.

Hoping to carry the momentum of their consecutive scores, Charles Henderson continued pushing forward only to allow Greenville a fumble recovery which gave them the opportunity to change the score.

Despite losing Posey to injury and a new quarterback Riley, the Tigers pushed out a rush for a touchdown retaking the lead 16-14. After a penalty on Greenville, the Trojan’s grasped another touchdown making it a neck and neck race for the two teams.

Greenville special team’s player Tyler Lewis caught the ensuing kickoff and returned it inside Troy’s red zone. Riley then rushed the ball 10 yards across the goal line closing the score gap for the Tigers to a field goal.

With a minute left before the buzzer Greenville tried an on-side kick that was recovered by the Trojans who held onto the ball until game end and securing their win.

Head Coach Josh Mclendon said, “Our players played extremely hard. We committed too many mistakes on offense with turnovers and costly penalties on both sides of the ball. We have to regroup and get some guys healthy and we’ll be fine.”

He continued “I liked our effort, we just need to clean up some mistakes.”

The Tigers will travel to Rehobeth this Friday for their next game. Kickoff is at 7p.m.