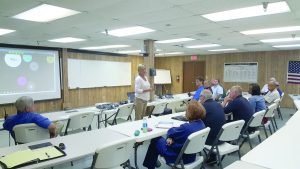 Kris Ware, the new Butler County EMA director, could say she has been thrown into the fire her first week on duty. She replaces Shirley Sandy, who passed away in April of this year. Not only has she had to familiarize herself with procedures, but the community and the officials she directly deals with. Her first official incident came last week with a hydraulic fuel leak from a Republic trash truck which traveled an estimated five miles on the streets of Greenville. City crews responded immediately when she requested help dispersing sand over the spill. The city then used their street sweeper to vacuum the sand and they placed it on plastic for Republic to come, gather and dispose of in an environmentally sound manner. After completing that task, Ware was then faced with Hurricane Nate barreling towards our area. Though damage was minor from the hurricane, Ware indicated one mobile home had a tree fall into it in the City of Greenville but no one was injured, and then two homes were damaged in the area of U.S. Highway 31 and Butler County 75 South. She has contacted the weather service  for information as there may have been a possible tornado touchdown in the area. Power outages were light with a report of 2000 Pioneer Electric customers being without electricity Sunday and also parts of Greenville’s downtown area. She is originally from Montgomery but currently lives in Dothan until she can find a place in the Butler County area. She was public directions director for the Houston County EMA. She is CLEM certified, which stands for Certified Local Emergency Manager and her experience directly involved tornado damage and cleanup both in Houston and Tuscaloosa counties.